How Forms and A, B, C Years Work in AO for Groups?

It looks more confusing than it is.

The following year, everyone is a year older. A couple of younger siblings have finally aged into Form 1, and some students have moved up to the next Form. Diego and Lucy have moved up to Form 4 (we intend to have a Form 4 for them by then!) In this second year, everyone does Rotation B. This year's roster might look like this:

Because some students are joining in or moving up at different times, it's more necessary than ever that students keep some sort of timeline. Students in schools that work this way don't have a problem keeping their eras and times sorted if they keep a timeline or Book of Centuries.

The co-op or school is now starting on its fourth year (can you believe it?) and the cycle starts over again, with everyone repeating Rotation A, but some students have moved up and others have joined, so no student is doing the same thing over again. Nevaeh and Samuel have moved up to Form 4. 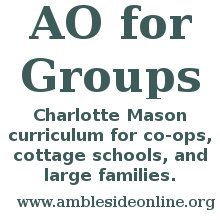