Jean Honore-Fragonard (1732-1806), was a French painter who worked largely during the days of the worst excesses of the French Aristocracy, just before the French Revolution. In fact, though he survived the French Revolution, his career did not, because most of his patrons were members of the aristocracy who died on the guillotine.

He was born at Grasse, the son of a glover. At 18, he studied for a few months at Chardin's atelier, and then under the tutelage of Francois Boucher, whose style he soon acquired so completely that the master entrusted him with the execution of replicas of his paintings.

He first painted several religious works. "Jeroboam Sacrificing to the Idols" gained him an entry into the the French Academy in Rome. His next important work was Christ Washing The Feet of the Apostles.

During his time at the Academy in Rome, he studied the masters and was tutored by many well known artists of the day, but perhaps a summer sojourn at the Villa d'Este in the company of the Abbe de Saint-Non [I think this refers to the Italian artist Jean-Claude Richard] did more towards forming his personal style than all the training at the various schools. It was in these romantic gardens, with their fountains, grottos, temples and terraces, that he conceived the dreams which he was subsequently to embody in his art.

For a time Fragonard had hesitated between religious, classic and other subjects; but now the demand of the wealthy art patrons of Louis XV's decadent, pleasure-loving and licentious court convinced him to focus his work largely on scenes of love and voluptuousness. Such subjects, of course, were not to everyone's approval, but even his detractors admired the tender beauty of his colour and the virtuosity of his facile brushwork. He is, according to the art historians and critics Richard Muther and George Kriehn (who disapproved of his topics) "the cleverest of the late rococo painters, and indeed one of the most refined artists of the century." They call him a "subtle charmer, in whose works all the joy in life and light-heartedness, the whole grace of the Rococo is once more revealed."

His works were often bizarre and coquettish in conception, light and delicate in tones. He also drew very delicate landscapes. In his youth he drew the ancient Roman villas in their mixture of grandeur and decay, black cypresses rigidly stretching their boughs to heaven, and bright white statues blinking from the green foliage. Later on he left Paris every summer for the country to portray in fresh pictures peasant life. Countrymen repose after the day's work, laundresses spread their linen upon the meadows, cows and donkeys graze in a lonely field. Children especially are the heroes of these pastoral scenes; they make their little dogs dance, play with Polichinelle, or receive their supper from their mother.

He married Marie-Anne Gerard, herself a painter of miniatures in 1769 and they had a daughter, Rosalie, who became one of his favourite models, until her death at about aged 19. Later he had a son who also became an artist.

His portraits made him the admired favourite of modern Impressionists, and it is interesting that the impressionist painter Berthe Morisot was either his grand-daughter or great-niece (depending on which historian you read).

The paintings of Watteau and Fragonard, more than any others, represent the sparkling frou-frou of the Rococo. Looking at an exhibit of Fragonard, one would come away with a colorful collection of frivolity, of hoop-skirts, silken trimmings and short petticoats, swings revealing interesting grey stockings, rosy cheeks and shoulders, of cupid's kisses and love-play.

The Advisory chose Fragonard's works with care, because most of his subjects are not suitable for children. We would not call him a moral artist, but he is among the masters, and all of his paintings show sparkling verve, spirit and dash.

It is astonishing with what fine feeling he arranges his colours and by what simple means he expresses life and movement. He generally used water-colours, not oil, and never painted upon a large scale, and this contributes to the air of fantasy, if not the fantastic, of most of his works.

The carnival of the Rococo approaches its end; and Fragonard is the Pierrot Lunaire, skipping about pale and ghostlike at dawn. The Revolution made an end to the Ancien Regime, and Fragonard, who was so closely allied to its representatives, left Paris in 1793 and found shelter in the house of his friend Maubert at Grasse, which he decorated with the series of decorative panels.

Fragonard returned to Paris early in the 19th century, where he died in 1806, neglected and almost forgotten. For half a century or more he was largely forgotten, but collectors and critics discovered him again in the early 1900s.

Adapted from:
The Encyclopedia Britannica, volume 10, edited by Hugh Chisolm, 1911
The History of Painting from the Fourth to the Early Nineteenth..., 1907, Volume 1 By Richard Muther, George Kriehn 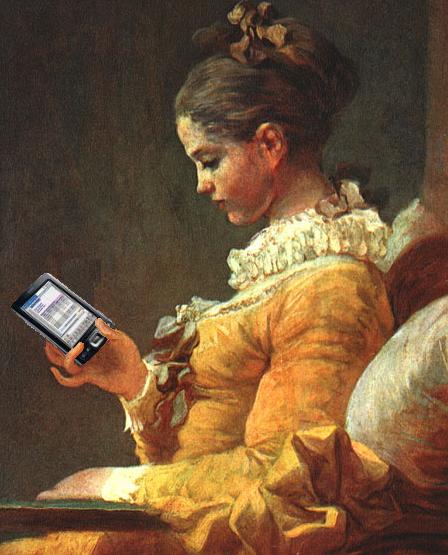 More By Subject:
AmblesideOnline's free Charlotte Mason homeschool curriculum prepares children for a life of rich relationships with God, humanity, and the natural world.
Share AO with your group or homeschool fair! Download our printable brochure